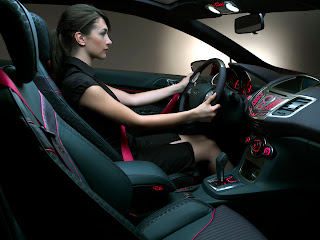 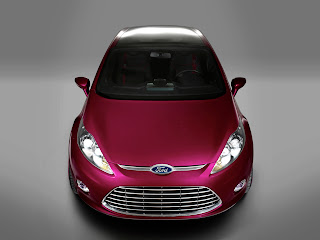 Say hello to Verve. Oops, sorry, that was the tag line for somebody else's small car, but there's little denying Ford's need for a small, fuel-efficient and affordable alternative, something that could go up against the likes of the Toyota Yaris or Honda Fit. And from the hints theU.S. automaker is dropping, its Verve concept may very well fill the small car hole in its lineup.
The concept builds on prior prototypes, such as the Iosis, which, in Ford-speak, introduced the new "kinetic design" philosophy. The sculpted form is designed to project both agility and muscularity - in sharp contrast to the cheap-and-cheerful small cars of the past.

From nose-on, the Verve's design is dominated by an inverted, trapezoidal lower grille, with the traditional Ford oval in a smaller, upper grille. The prominent headlights, featuring projector and LED lights, flow into the sculpted hood.

In person, the Verve's huge eggcrate grille dominates the view from the front and gives it an aggressive look that's toothy yet toothsome. From the side around to the back, the Verve's smooth arcs and gently contoured surfaces contrast with the front end's sharpness. Unfortunately, such lines would likely never make it to production as they look like they would obscure visibility and the view from the back seat.

"Our design team took an unrestrained approach to how our future small cars could look, and this eye-catching concept was one of the results," said Ford of Europe President and CEO John Fleming in the press release that accompanied the unveiling. "If we get the reaction we expect, I'm certain that the team will incorporate elements of this advanced design vision into our final production design."

From the side, the goal was to project a sense of motion, enhanced by pillarless side windows and a curvaceous roof line, as well as a dynamic "belt" and bold wheelwells.

The Verve's rear features a central exhaust integrated into the lower diffuser, with complementing elements of dark chrome and brushed aluminum.

The high-tech interior was inspired, according to Ford designers, by the latest mobile phones. While some manufacturers are consolidating electronic systems into a select set of controls, Ford "decoupled" the various elements, such as navigation and audio, with buttons and controls placed in logical and easy reach.

The primary gauges - speedometer and rev counter - are uniquely framed by binocular-shaped, short tunnels of brightwork which complement the center stack and contrast the rich interior colors like a fashion accessory.

While Ford officials suggest the Verve is an indication of what's soon to come from their design studios, John Fleming, president and CEO of Ford of Europe, cautions that the concept's primary goal is "to generate reactions while our production plans are taking shape."

Ford officials are notably silent on some critical specifics, including the Verve's powertrain package. Considering the show car will first be seen in Frankfurt , it's a safe assumption that at least one diesel is in the offing.

Meanwhile, there's no specific timetable for production, but there are ways to make an educated guess. Last December, Mark Fields, Ford's President of the Americas , suggested a new small car would arrive for Stateside buyers in about two years, meaning sometime during the 2009 model year. A final version of the Verve is likely to be that car - or at least one version, anyway. European buyers would likely see the Verve roll into their showrooms about the same time.
by Paul A. Eisenstein