F-150 bids to stay on top with makeover 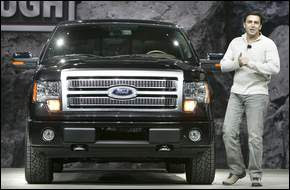 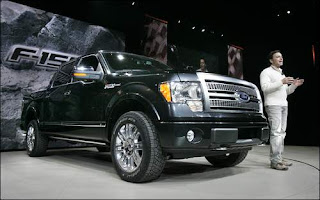 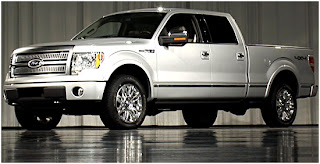 Scott Burgess / The Detroit News
The new F-150, Ford says, is built Ford tougher.
It's hard to argue with that.
The redesigned 2009 Ford F-150 underwent an overhaul inside and out, as Ford designers changed out all of the sheet metal, provided more standard features and more choices for the company's best selling vehicle. Even the F-150 badge is updated.
Ford also added a new premium truck, the Platinum Series, to one up the high-end Western motif found in King Ranch.
In other words, the new F-150, which will be unveiled today at the North American International Auto Show, offers more, is stronger and has more amenities to choose from than ever before. With three cab styles, four box options and seven trim levels, there are 35 different configurations customers can build their pickup. Add on 13 wheel choices and Ford offers even more variety.
However, Ford has taken away the V-6 option on its trucks with the 2009 model. Instead, customers can choose from the 4.6-liter and 5.4-liter V-8s. A diesel engine and Ford's EcoBoost direct injection turbocharged V-6 will be available in 2010.
The redesign comes at a tough time for the auto industry. Large trucks have fallen out of favor with some consumers as gas prices remain high, the housing market continues to slide and the threat of a recession increases.
Demand for full-size pickups dropped last year 3.2 percent, according to Autodata Corp. Ford's sales fell 13.2 percent.
That didn't stand in the way for Ford. The Dearborn-based automaker rebuilt the truck from the frame, which is now 10 percent stronger, all the way through the interior.
While the trucks keep their Ford looks, every model will have a different version of the Ford's iconic three-bar grille.
"We wanted to give every model a distinct appearance while keeping the truck's signature tough look," said Pat Schiavone, design director, Ford truck and SUVs.
The fenders keep their flares, but add a distinctive groove above them. Additional trim along the doors connects the fenders and creates the optical illusion that the trucks are larger than they look.
But don't mistake that for these trucks being small. They're far from it.
As the height of the beds grew through the years, many customers have complained that they couldn't reach into the bed, so Ford added a unique side step between the cab and the rear wheel. The feature works perfectly, opening up with the touch of your toe and allowing you to step up and reach into the bed. It closes just as easily as pushing your foot against it.
The most dramatic change of the F-150 is its tailgate, which now includes a pull out step found on the Super Duty trucks.
From the rear, the taillights look smaller, but they wrap around the side, taking up more quarter panel real estate on the side than the back. The effect makes the truck look wider.
The bed is also more functional. Aside from the box side step, Ford will offer a factory installed cargo management system, and stowable bed extender, which folds up and rests against the bed walls when not in use.
Inside, Ford has refined the interior. A back up camera integrated into the rear view mirror allows the driver to easily back up and connect the truck's hitch to a trailer.
Ford's Sync system is also available, which allows the driver to operate a phone and music device with voice commands.
Ford also added more storage spaces inside. All told, there are more than 30 places to store items. The center console is two-inches longer, providing more space.
The shifter was changed to make it more ergonomic, and the switches were made larger. There are also two 12-volt outlets placed on the dash and center console.
The seats were upgraded and designed to include a power recline and power adjustable lumbar, as well as heating and cooling functions.
Retooling this top selling pickup is a difficult task. But the 2009 F-150 hits the mark -- inside and out.