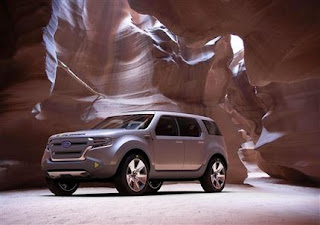 By DEE-ANN DURBIN AP Auto Writer
AP Photo
DEARBORN, Mich. (AP) -- Ford Motor Co. is hinting at a new, more fuel-efficient direction of its iconic Explorer sport utility vehicle with a concept that will debut at the North American International Auto Show in Detroit.
The most radical change: The Explorer America concept is built on a more car-like unibody frame, rather than the traditional truck frame, to reduce weight by 150 pounds and improve drivability. But Ford says the Explorer America is still roomy enough for six passengers and gear, and can tow 3,500 pounds.
The Explorer America improves fuel economy by 20 to 30 percent compared with today's V-6 Ford Explorer, depending on the engine. Choices include Ford's new EcoBoost gas turbocharged direct-injection engine - a four-cylinder, two-liter engine that would provide 275 horsepower - and a V-6 with 340 horsepower.
Lightweight materials, smaller but more powerful engines, aerodynamic improvements and fuel-saving electric power-assisted steering are among the other ways Ford dropped weight from the vehicle to improve fuel economy.
Derrick Kuzak, Ford's head of global product development, said last month that Ford is experimenting with materials, including steel, aluminum and magnesium, and will make decisions in the next few years about using them for future products. He said reducing weight will be a key part of meeting tougher fuel-economy standards recently set by Congress.
"We have to be serious about lightweight vehicles," he said.
Ford has sold more than 6.5 million Explorers since the SUV went on sale in 1990 as a 1991 model. The Explorer still leads the mid-size SUV segment, although the segment has been suffering because of high gas prices. U.S. Explorer sales were down 23 percent in 2007 to 137,813.
The Explorer suffered a setback earlier this decade when hundreds of people were killed or injured in accidents involving tread separation on tires, most of which were on Explorers. Ford blamed tire company Bridgestone/Firestone Inc., while Bridgestone said the Explorer's design was faulty. Ford replaced the tires.
In November, Ford agreed to settle a class-action lawsuit covering 1 million plaintiffs in four states who claimed their Explorers lost value because of the perceived danger. The company is still facing personal-injury and wrongful-death lawsuits.