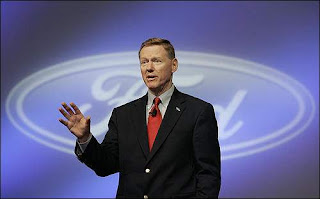 Bryce G. Hoffman / The Detroit News
DEARBORN -- The United States is less critical to the ultimate success of Ford Motor Co. as the automobile business becomes increasingly more global, Ford CEO Alan Mulally, said Tuesday night.
About a third of Ford's business will be in North America and South America, he said, a third in Asia and the Pacific; and a third in Europe, Africa and the Middle East.
"The companies that prosper are going to be global companies that serve all three markets," Mulally said during a dinner with journalists.
Mulally said that nearly 70 percent of all Ford vehicles sold in 2007 were sold outside the United States, and he expects that to increase as the company rides the wave of growth in emerging markets such as Russia, Brazil and China.
Ford sales in China increased 30 percent year over year in 2007, Mulally announced Tuesday.
"We're growing as fast as the fastest in China," he said, noting that the Ford Focus is now one of the top 10 vehicles there.
In a move to boost its market share in India's booming economy, Ford said separately Tuesday that it will double production in India with a $500 million investment and start making an inexpensive car.
A significant part of Ford's investment will go into developing new products, including a new small car, within two years and an engine facility by 2010, the company said in a statement.
When asked about India and Tata Motors' plans to introduce a $2,500 vehicle in its home market, Mulally said Ford will choose carefully how it responds.
"We're going to be very selective about which markets we participate in," Mulally said. "We'll stick to our strengths and use our size to be competitive."
At the same time, Mulally said Ford will better match production with demand and adjust North American production capacity.
Mulally said Ford's sinking stock price, which hit a 20-year low last week, will not change the company's plan to stick to its "Way Forward" turnaround plan.
He said Ford still plans to return to profitability in 2009, despite increasing economic headwinds.
"Liquidity-wise, we're in very good shape," he said.
In other news Tuesday night:
• Joe Hinrichs, Ford's global manufacturing chief, said buyouts for United Auto Workers members will likely be announced in the first quarter.
He also said the Canadian Auto Workers union will have to make Ford's factories north of the border competitive if they want to keep production.