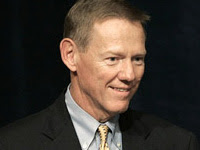 By Phil LeBeau
Having covered and coming to know Alan Mulally during his time running Ford and previously as head of Boeing Commercial Airplanes, I've come to expect him to be upbeat, even in the most dire of times. I've also been with him enough to know when his optimism turns to quiet confidence.
I saw it when he shifted Boeing's future plane plans from one that could fly 10 percent faster to one that will save 20 percent in costs: a strategy that has made Boeing's 787 Dreamliner a red hot seller. Mulally knew the strategy was right and it ultimately paid off. I'm sensing that same self confidence in his turnaround plan at Ford.
Tuesday night Mulally, Ford President Mark Fields and other Ford executives held an "on the record" dinner with several journalists. There were a few kernels of news like Ford expecting the Jaguar/Land Rover sale to close in the first quarter and Mulally not considering any mergers since he thinks the best way to fix Ford is to integrate it's global assets.
What struck me the most was the demeanor of Mulally. It's the first time since he took over at Ford that I saw glimpses of that quiet confidence I saw in him at Boeing. Maybe it's because he is more than a year into the job and there are signs his plan to build "one Ford" is working.
The promise is in the company's growing business overseas. Or it could be in the company's plan to roll out more fuel efficient models including a hybrid Fusion and hybrid Mercury Milan by early '09. Or in the fact that Mulally feels he has the management team in place needed to revive the automaker. Whatever the reason, the quiet confidence is there.
Now, this doesn't mean I'm completely sold on Ford's future. I like what I see with the new Flex, the Verve, and F-Series pick-up. And Ford's vision for waking Lincoln is intriguing. Still, I want to see Ford re-establish itself with car buyers through better marketing. The "perception gap" between the quality of Ford's cars and how the public views them will have to be closed.
We will look at Ford's future models including the new F-150 pick-up Monday night in CNBC's primetime special at 9 Eastern. Check it out--you won't want to miss Ford's vision for its Lincoln line.