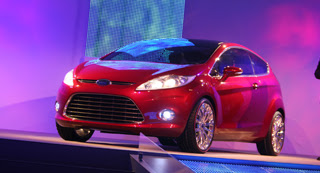 Ford unveiled the Verve Concept last week at the Frankfurt Auto Show. It’s the latest iteration of Ford’s ongoing “kinetic design” theme. The new Kuga, Mondeo, and redesigned Ford Focus Europe will be hitting the roads of Europe by the end of 2008, but this concept car is a bolder step in the small-car direction. Martin Smith (Executive Director of Design for Ford of Europe) describes the Verve Concept as “a chic, modern, and individualistic statement for a sophisticated, fashion-aware generation.” The concept was created by a team of designers from Ford studios in Dunton, England, and Cologne, Germany.
Ford is looking for public reaction to inform the design team’s vision. European design chief Martin Smith said that showing the Verve Concept at Frankfurt will be one of several opportunities in the near future for public feedback, and John Fleming (President and CEO of Ford of Europe) described the Ford Verve as a “bespoke concept car to generate reactions while our production plans are taking shape.”
This is significant for Ford. They’re shifting their design direction and creating a new small car portfolio in major world markets. Verve is the first of three small-car concept vehicles which will debut in Europe, Asia, and North America.
Given a wide degree of freedom to create the concept, the design team, including lead exterior designer Chris Hamilton, grounded their efforts in reality. From its surfaces, colors, and materials, the Verve has a sense of sophistication and fashion. While Ford Verve Concept was created with an eye toward production, there’s no news about specific plans yet.