Ford will Rock the Rally World 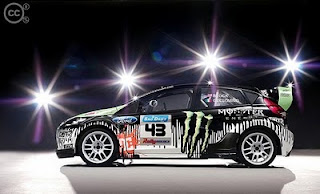 It was a shock to the off-road racing world when superstar Ken Block announced that he would be leaving his successful Subaru team to get behind the wheel of the new Ford Fiesta and Ford Focus rally cars. Come see the new Fiesta at Gresham Ford today!The Fiesta was heavily hyped leading up to the 2010 Detroit Auto Show and the new compact was well received in sedan and coupe version. Come see what all the hype is about. Visit www.GreshamFord.com to see our online inventory of new Ford Fiesta's. They even had a dressed up Fiesta to show off the sport compact potential of their new small car.

This past Saturday brought us the debut of the Ford-Block partnership in Atlanta, Michigan and while Ford built this up to be the introduction of a prosperous new race team – things didn’t work out as planned. First, the unseasonably warm weather caused much of the snow to melt, followed by a cold snap that turned the race course into a sheet of rough ice. Ford is gaining respect in this arena.

Block’s Monster Energy Drink sponsored Fiesta came storming out of the gate, leading after the first stage by almost 5 seconds. During the second round, the team of Block and Alessandro Gelsomino dropped to third place behind ex-teammate Travis Pastrana in a 2010 Subaru STi and the 2009 Mitsubishi Evolution X piloted by Antoine L'Estage although the Fiesta was only around 6 seconds out of first and less than a second out of second place. During the third round, Pastrana’s Subaru expanded the lead to almost 20 seconds over the second and third place entries although Block’s Ford had closed the gap to second to just 2 tenths of a second.

Unfortunately, during the fourth round Ken Block’s 2011 Ford Fiesta suffered suspension failure, although that news hasn’t been mentioned much on a variety of websites including the Monster World Rally Team website and Ford’s media site.

It was a shock to the rally racing world when Block left Subaru for the new Ford Racing team and failing to finish his first event after leading early in the event had to have been a disappointing outcome. Making the matter worse was the fact that Block’s former teammate Travis Pastrana ran away with the event – winning with a minute and a half lead over the second place Mitsubishi Evolution X and the third place Evolution IX.

Ken Block’s new Ford Fiesta rally car will be back on the track in late February as the series heads to Salem, Missouri. Check out the links below for the Sno*Drift website, as well as the Monster team’s site and a video of Block testing his 2011 Fiesta before the event last weekend. Also, for those who haven’t gotten a good look at the 2011 Ford Fiesta rally car, check out the Gresham Ford facebook page to see lots of interior and exterior photos. Ford is now offering $1000 trade in incentive rebate when you trade in a Honda, Toyota, Lexus, Scion or Acura on any new Ford car, truck or SUV. Call 503-665-0101 or visit the corner of 242nd and Powell Blvd for more information.