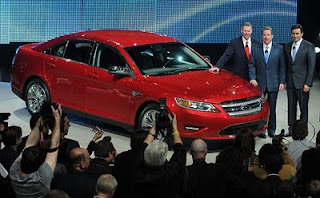 U.S. sales at Toyota Division, which markets each of the recalled models, fell 19 percent. The Lexus luxury division, which wasn't targeted in the Jan. 21 recall, gained 5 percent.

Subaru, the only brand with U.S. sales gains in each of the past two years, began 2010 with a 28 percent sales jump.

Ford said today it didn't see any change in conquest sales based on the developments at Toyota. "Just a week into this announcement, it's very hard to predict what's going to happen," said George Pipas, Ford's chief sales analyst.

Beyond January, Toyota's sales shutdown will have a "significant" impact in the short term, said David Sargeant, vice president of automotive research at J.D. Power & Associates, before today's results were released. He said Toyota will likely to lose a few percentage points of market share for February.

"The bigger issue is what's the longer-term impact on their reputation and how that will affect sales going forward," Sargeant said. "What we know is that Toyota's sales are very heavily dependent on reputation for quality and safety."

Yesterday, Toyota said it had found the remedy to fix potentially sticky accelerator pedals in the recalled vehicles, but the company said it is expected to take some time for dealers to complete repairs.

Reuters said analysts and industry executives expect a January selling rate of 10.5 million to 11 million units on a seasonally adjusted annual basis, up from 9.8 million a year earlier. A Bloomberg poll of eight analysts put last month's SAAR at 10.5 million.

Sales fell below the 10 million-unit annualized rate in January 2009 for the first time in almost 30 years, as unit sales fell 37 percent from 2008 amid a deep economic downturn.

Last month's totals are expected to be down from the 11.9 million-unit rate of December -- when automakers posted a 15 percent sales increase compared with the prior year, supported by year-end incentives that helped retail sales.

A total of 10.4 million light vehicles were sold in the United States last year, down from more than 17 million at the start of the decade.

"There's no question that the worst is behind us," Ford's Pipas said before today's results were released. "We're into a period of expansion.

"This is probably not going to be the kind of recovery that is nice and linear," Pipas added. "We're going to see fits and starts for the consumer."

Ford today projected its January market share at 16 percent, in line with the share for all of 2009.

A projected drop in January retail sales is likely to be offset by a strong rebound in fleet demand. Fleet sales were pummeled last year after financing dried up and businesses pulled back on spending in the wake of the U.S. banking bailout.