General Motors said it is recalling 5,000 2010 model-year heavy-duty cargo and passenger vans and asking customers not to use the vans until the company can find a fix for a faulty alternator.


The company issued the same caution for some aftermarket alternators.

GM is advising customers with the affected alternators not to drive the vehicles, park them away from buildings and to disconnect the battery. GM also has stopped production of the vans until it finds a solution.

Most of the vans are in rental fleets or on dealer lots, GM said, and few had been sold in retail. Light-duty model 1500 vans are not affected. 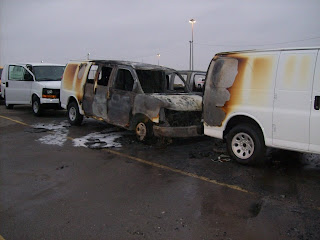 Ford has had its moments but this is just plain scary.  For more information contact your local Checrolet dealer in the Portland Metro Region or Vancouver.  The Ford E-Series Van has great features.


Prep Package - This available package allows the 5.4L V8 engine to be operated on CNG/LPG fuels.
Package includes only hardened valve faces and seats and is available as a factory-direct option. Neither Express nor Sprinter offer this added capability.  User-defined Upfitter

Switches - These available prewired switches can operate up to four high-powered relays for heavy-duty accessories such as winches, lifts or lights. Express and Sprinter offer a single switch to control a high-idle function only.  Trailer Tow Mirrors - Telescoping, folding trailer tow mirrors are standard on E-Series Commercial Vans and help provide improved rearward visibility when towing but also can be retracted or folded in to improve vehicle clearance in tight spaces. Neither Express nor Sprinter Cargo Vans offer telescoping mirrors.  Rearview Camera - Activated when the vehicle is shifted into Reverse, this feature, available on E-Series Commercial Vans, shows a rearview video image of what is directly behind the vehicle.  Included in the display are a center line and distance guides that make it very convenient to back up to cargo to be loaded or to hook up to a trailer. The display is located in the rearview mirror on vehicles without a navigation screen or in the navigation display if so equipped. Express does not offer a rear view camera on any model.  Corrosion Protection - As part of the New Vehicle Limited Warranty, all E-Series
Commercial Vans come with 5-year/unlimited-mileage Corrosion (Perforation) Coverage, demonstrating its
proven Quality, Reliability and Durability traits. Express and Sprinter Cargo Vans both limit their Corrosion
Coverage to 100,000 miles.  SYNC® - Available on all E-Series models, SYNC is a fully integrated, voice-activated entertainment and communications system that allows control of Bluetooth®(7) wireless technology enabled mobile phones and digital media devices. Allows owners to keep both hands on the wheel while using their phone or managing their audio listening choices.(6) A similar feature is not available on any Express or Sprinter model.  Anti-theft Ignition - All E-Series Commercial Vans offer the SecuriLock®
passive anti-theft ignition system to help prevent the engine from being started unless a coded key programmed to the vehicle is used. Sprinter does not offer the added security of an ignition anti-theft system.  Cargo Protection - E-Guard Cargo Protection SystemTM is a segmentexclusive(5) option featuring reinforced rear- and sidedoor locks that help to provide an even higher level of security for the vehicle contents. The system is designed to be unlocked only with the vehicle key, even on models with remote keyless entry.  AdvanceTrac® with RSC® - (Roll Stability ControlTM) Available on select E-Series Commercial Vans and standard on Recreational Vans, AdvanceTrac with RSC helps the driver maintain vehicle control under a variety of driving conditions.(4) The electronic stability control systems used on Express and Sprinter Cargo Vans do not incorporate a dedicated roll-rate sensor; they estimate vehicle roll rate.

Gresham Ford Fleet has a wide variety of E-Series Van for every application.  Give them at call at 503-969-4184 or visit them at the corner of 242nd & Powell in Gresham.  The Ford Fleet team understands that in Portland and Vancouver you have your choice of Ford Dealerships.  Gresham Ford is committed with its Fleet Team to providing the best customer service through the Business Prefferred Network or BPN.