Flat Stanley Loves the "Man with a Plan"

Bob, Preston, Flat Stan (remember him?  --made by our granddaughter, travels in an envelope) and I traveled to Detroit for the 2010 Ford Motor Company National Meeting. And oh, what a meeting it was! The hottest new products in decades were there. We got to drive, touch, smell and hear those engines! Just some of the highlights: A Mustang with over 300 horsepower that gets 31 mpg. The new Fiesta with all the tech gadgetry of cars costing 5 times as much and yes ladies it comes with heated seats! The Fiesta is best in class in fuel economy for all cars, trucks & SUV’s, has touch screens, dual hatchbacks and more! There never, and I say never, has been such a good looking line-up.

These new Fords are not just pretty faces - they are so much more! At the center of this was Mr. Alan Mulally.  Now Flat Stan thinks this CEO is the smartest man in America and we tend to agree with him. Flat Stan was so excited to have his picture taken with Mr. Mulally and wants to share his big smile. Become a Facebook friend of Gresham Ford and you can see their picture! Mr. Mulally came to Ford from our good neighbor here in Gresham & the Northwest, “The Boeing Company” with a PLAN!!

How is he different? /why is he so smart? He had a PLAN. That plan positioned Ford Motor Company to not have to borrow money from the Government. If he had borrowed money, he would not tell the public he had paid it ALL back when he had not! He has built a culture among his management team that considers profits important, but safety is a must!  He has been a great leader letting us know his plan shortly after arriving at Ford. It was simple-most great plans are! The Plan centered on just four words: 1. QUALITY 2. GREEN 3.SAFETY 4. SMART TECHNOLOGY. He and Ford Motor Company have delivered!! So the final part of the plan - just come DRIVE ONE! Was a great trip! Flat Stan also got his backside tattooed (autographed). As a grandmother, I am usually not in favor
of tattoos but, it was Richard Petty for gosh sake – he’s a legend!

Gresham Ford is your Portland Ford Dealership also serving Vancouver with the Ford Line-up of Cars, Trucks. SUVs, Vans and Crossovers.  The Gresham Ford Fleet Department also cares for the commercial fleet customers of Portland and Vancouver.  Ford has released all new Ford Super Duty Trucks that really stand out when compared to the Dodge or Chevy counterparts.  The New 2011 Ford Superduty is truly a work truck for Oregon and Washington.  Click here to see our New Trucks available at Gresham Ford your Oregon Ford Dealership.  Click here to see our afforable work trucks now available in the Portland Vancouver area.  Oregon Fleet Sales is what the Gresham Ford Fleet department does.  They help all kinds of business customers find the work vehicles that meet and exceed their needs while keeping the maintenance costs low. 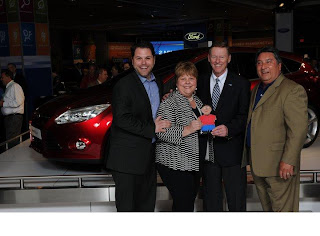