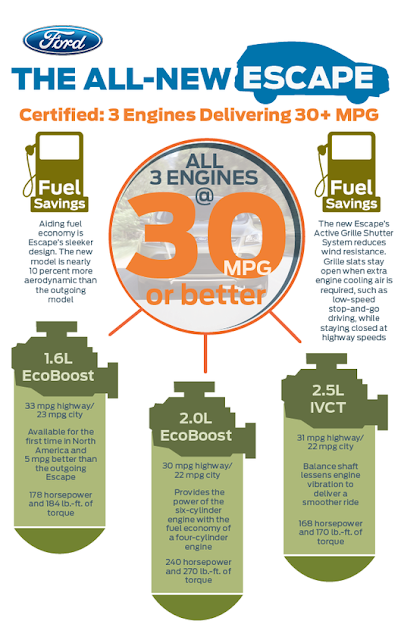 The all-new four-model lineup for 2013 includes: S, SE, SEL, and the Titanium.  The 2013 Ford Escape boasts Intelligent 4WD along with two EcoBoost engines (1.6L I-4 and 2.0L I-4) paired with a 6-speed SelectShift Automatic transmission.  Also new for the 2013 Ford Escape is Electric power-assisted steering (EPAS) with pull-drift control and active nibble control as well as braking system enhancements.  The AdvanceTrac with RSC (Roll Stability Control) has been improved since it first was introduced by Ford.  A Class II Trailer Tow Package is standard equipment for those who need to tow their toys.  The Active Grille Shutter System is another addition to the 2013 Ford Escape that continues to improve its gas mileage.

Ford has also focused on safety and security in the newest redesign of the Ford utility line of vehicles.  Next-generation Ford airbag technology has been utilized including the addition of a Driver knee airbag, Safety Canopy with rollover sensor and Front-seat side airbags.  The New Escape also showcases a new seat and head restraint coupled with an instrument panel designed to reduce knee damage.  The Ford LATCH (Lower Anchors and Tethers for Children) system has also been improved to make it easier for parents to seat belt their children in and work better with a wider array of child safety seats.


The new 2013 Ford Escape has been redesigned with all kinds of available creature comforts that improve the convenience appeal of this already loved Ford SUV.  Available options now include things like Hill Start Assist, Forward Sensing System as well as a Reverse Sensing System that enables technology like cross traffic alert, adaptive cruise control and more!  Rain-sensing windshield wipers are also available on the better appointed trim lines of the Ford Escape.  This compact SUV also has a Class-exclusive(1) active park assist.  You simply press the button in the center stack and the vehicle utilizes the forward sensing system to locate a parking space that is large enough for your vehicle.  Instructions will appear on the display and when you shift the vehicle into reverse while control the gas and brake pedals, the vehicle takes over steering and navigates you perfectly into your parallel parking space.  For those of us that have control issues this may take some getting used to but otherwise it is a true leap in driving technology.

Ford has also included a Rear view camera in the available options.  There is talk of making these cameras mandatory for commercial and municipal vehicles to ensure safety.      Ford is also happy to offer their BLIS (Blind Spot Information System) with cross-traffic alert for those safety conscience buyers.  This technology comes in handy when backing out of a parking space while you are surrounded by large vehicles you simply can not see around.  Like the reverse sensing system ,showcased on previous model year vehicles, will beep when a vehicle enters your "space".  This is made possible by the rear facing sensors that also keep a eye out to what is going on around the rear of your vehicle. 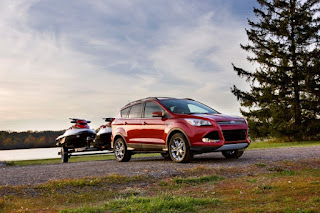 You will definitely see this option in many commercials and parking lots during the Christmas season - the Ford Class-exclusive(1) hands-free power lift gate.  All you do is wave your foot under the rear bumper and the lift gate will raise.


The comforts that we have grown to love like Heated front seats, Media hub and HD Radio™ with iTunes® tagging capabilities are all still there, some are even standard.  The 2013 Ford Escape also offers Optional 110V household-style three-prong outlet to increase the ease of powering laptops, blenders, whatever you like.  The Ford exclusive MyKey technology is standard equipment ensuring that teenagers everywhere will put their seat belts on only if it is so that the radio turns on.

Ford has again partnered with Sony® to provide a truly legendary audio system.  The ever evolving SYNC with MyFord and SYNC with MyFord Touch now accepts over 10,000 audio directions to climate, navigation, entertainment as well as to control your phone. 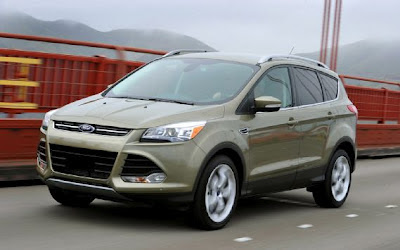 A new option for the 2013 Ford Escape is the available Power panoramic Vista Roof which provides the front seat a power moon roof option while the second row enjoys a clear roof experience.  In the Northwest we know how brief sun breaks may be and many prefer the size of the Panoramic Vista Roof over the traditional front row only sunroof.