Is your vehicle ready for Fall in Oregon? 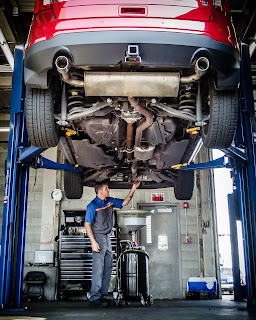 The sunny warm days are starting to slip away.  It's darker longer when we wake and darker earlier before bed.  Yes, fall in Oregon is upon us and the question is - "Is your vehicle ready for another Fall in Oregon?"  Before you know it the roads will be slippery and driving safely will be at the front of your mind.

Below are a few aspects that you may want to consider as we are all thrown into another Fall in Oregon.

Brakes and Tires.  Fall weather brings inclement weather road conditions.  These conditions require good stopping power and navigation in order to keep your family safe. If you haven't inspected your own tires lately, don't worry because you are not alone.  The Quick Lane inside Gresham Ford helps by providing a vehicle Report Card at EVERY visit so that you aren't surprised with the need for vehicle maintenance.  You will see that your vehicle is in the yellow zone and our Quick Lane Service Advisers will let you know that new tires will need to be part of the plan by your next oil change. 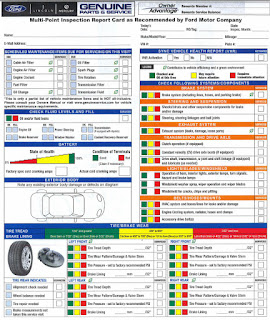 That means we all need good brakes and tires, below are a few links to coupons for both brake repair and replacement as well as a number of tire specials for your consideration.

Click Here for Auto Service Coupons
Checking the tire pressure is also a quick thing that you can do between oil changes in order to expend the life of your tires.  Tire pressure drops when the outside temperatures plummet. Keeping the pressure at levels recommended by the vehicle manufacturer can help to extend the life of your tires and help you get better fuel economy as well.  You can find the recommended tire pressure of your vehicle on the door or door jam of your vehicle or in your owners guide.

This is another check that the team at the Quick Lane inside Gresham Ford provides during every oil change.  If you haven't been to the Quick Lane, you should turn your headlights on and then get out to check that they are working properly.  The same should also be done with turn signals and brights and so on.

The purpose of wiper blades is to completely clear the windshield. Cracked or worn blades won’t do an adequate job. Check the blade’s rubber to ensure it's flexibility.  If you have lived in the Portland area for any amount of time you know how important wiper blades can be in a torrential downpour.

Having a fully charged car battery can make the difference between getting home and waiting two hours for AAA.  The QuickLane inside Gresham Ford is happy to provide complimentary battery checks to help ensure that you get home in time for dinner.

Dirty Oil and Air Filters can hinder proper operation of your vehicle this fall, so it's a good idea to get an oil change and inspect the air filter at the same time.  If you visit the Quick Lane at Gresham Ford they will also take this opportunity to check all your fluid levels including your cooling system.  No one wants to loose their heater core in the middle of the cold rainy system in Oregon.  Maintenance of your vehicle can help to reduce auto repair surprises greatly. 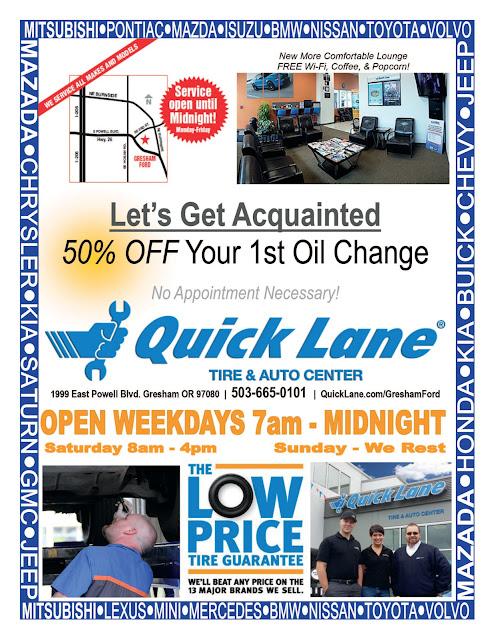 If you have any questions about getting your specific vehicle ready for Fall in Oregon, feel free to contact the Quick Lane inside Gresham Ford for more information.  For your convenience Auto Service and Maintenance is available until MIDNIGHT weekdays at the QuickLane in Gresham and you never need an appointment.  Call 503-665-0101 for more information.

2017 Ford Super Duty now better and strongest than ever

Gresham Ford has sold trucks since 1942 but none of them has been quite like the new 2017 Ford Super Duty Work Truck.  This is the TOUGHEST Work Truck that Ford has ever built.  With an all new high strength steel frame and a military grade aluminum alloy body the structure of the Ford Work Truck is already a segment first but Ford didn't stop there.  The axles, springs and suspension are also stronger providing even more strength to those who depend upon their commercial vehicles to make a living.  Built Ford Tough is not just a saying at Ford - it's a strategy from the ground up to ensure that we help keep America Strong.

Ford Motor Company has worked hard to provide not just bells and whistles but tools that enable Business Owners to maximize the time they spend in their vehicles.  The 2017 Ford Super Duty provides sixteen class-exclusive new features that include up to 7 cameras that help make towing and maneuvering easier and safer than ever.  The adaptive steering technology separates the Ford work truck from others like the Dodge Ram or the Chevy Silverado.  You can feel the difference when you take one for a drive.  There is a reason that more than half of the commercial work trucks across America are Ford Super Duty trucks and vans.  Ford is also different because they have built these vehicles from the ground up.  Both the gasoline and diesel engines and transmissions of the 2016 Ford Super Duty Work Truck are produced directly by Ford Motor Company.  You will also find that the Ford Super Duty tows and hauls more than ever before in addition to all of the other advantages over other work trucks.

Ford shared this week, during it's unveiling of the all new 2017 F-Series Super Duty, that even
though the Super Duty is America's best selling heavy duty commercial work truck - they don't take it for granted.   Ford has continued to increase the benchmarks for capability, performance and efficiency as they developed smart technology to better serve those who depend upon their work trucks to make a living.

Ford Motor Company has worked hard to improve on a truck that many commercial truck owners already love.  One of the reasons is a fully boxed frame that is stronger and holds up better than many other work trucks.  This high strength steel frame is now up to 24 times stiffer than on previous Super Duty Ford trucks and helps to add to the increased towing and hauling abilities previously mentioned.  If you need a four-wheel drive work vehicle, you will also be pleased to know that the 2017 Ford Super Duty provides even heavier duty driveline, axles and towing hardware to better serve our commercial customers.

Following the lead of the Ford F-150, the Super Duty starting with the 2017 model year will include the military grade aluminum alloy.  Ford has upgraded to the aluminum because it is far more dent resistant than the previous steel body and lighter too.  We don't experience it a lot in the Gresham Portland area but the aluminum is also resistant to corrosion from red rust.  Everyone is benefiting from the weight loss of the upgraded alloy.  The weight reduction of just over 350 lbs provides an increased towing and hauling capacity as well as fuel savings.

To find out more about the Ford Super Duty Work Truck:

The Gresham Ford Fleet Team is excited to share new information about the Ford Medium Duty F650 & F750 Work Trucks that Ford is producing.  These commercial trucks are built by Ford in Ohio, the manufacturing heartland of America, the all-new Super Duty Chassis Cabs F‑650/​F‑750 are designed to provide exceptional value and ease of upfit - like frame holes where you want them. 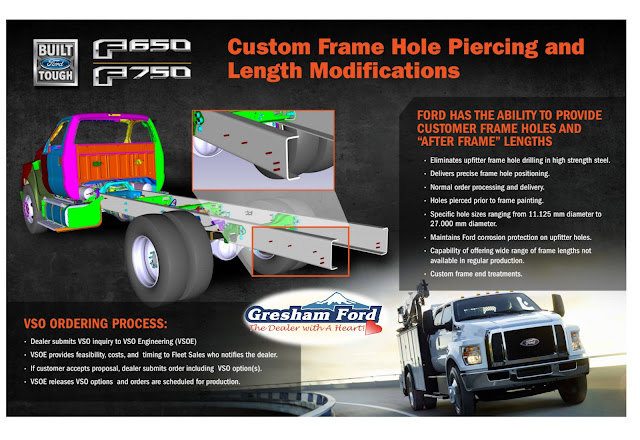 Ford is also offering a wider selection of models — including dedicated F‑650/​F‑750 Tractors — covering a broad spectrum of Class 6 and 7 vocations.  The new frame and suspension have cleaner cab-to-axle choices for easy, cost-efficient upfitting compared to the 2015 model.  There is also a new exterior design — including an all-new mesh grille framed by hallmark Ford nostrils — commands attention on the road with “Built Ford Tough” looks.  Not only do the new Ford Medium Duty Work Trucks look good but they provide power to get the job done with 6.8L V10 gasoline engine provides great power and performance.  The TorqShift heavy-duty 6-speed automatic transmission is Ford-designed, Ford-engineered and Ford-built and comes standard.  The diesel option for the new for Ford F‑650/​F‑750 is the proven Ford 6.7L Power Stroke V8 turbo diesel engine offering 3 levels of horsepower and torque.

When Ford talks about durability, it speaks from experience. Proof of this is the B10 design life on the Power Stroke® 6.7L V8 Turbo Diesel. B10 life is the measure of life expectancy a component is designed to meet. Ford engineers designed and tested the Power Stroke® 6.7L V8 Turbo Diesel to over 500,000 simulated F-650/F-750 customer miles, giving the diesel engine a B10 design life of more than 500,000 miles.  The Ford diesel engine is designed to have a 90% probability of working for over a half-million miles without requiring the removal of the cylinder heads or dropping of the oil pan. Now that’s Built Ford Tough! 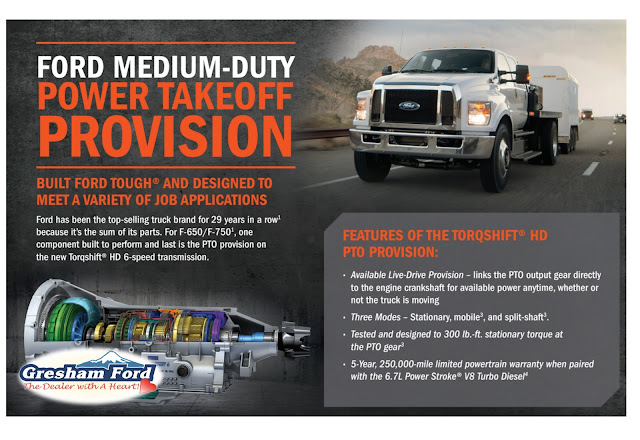 Being tough is just one reason that over half of Business Owners turn to Ford.  A strong second reason is the variety of applications that Ford enables you to customize your vehicle from the factory. 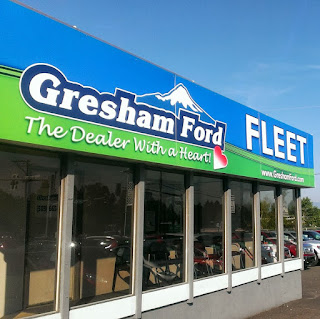 Contact Gresham Ford Fleet for more information and to build your next work truck just the way you want it - enjoy the turnkey experience.